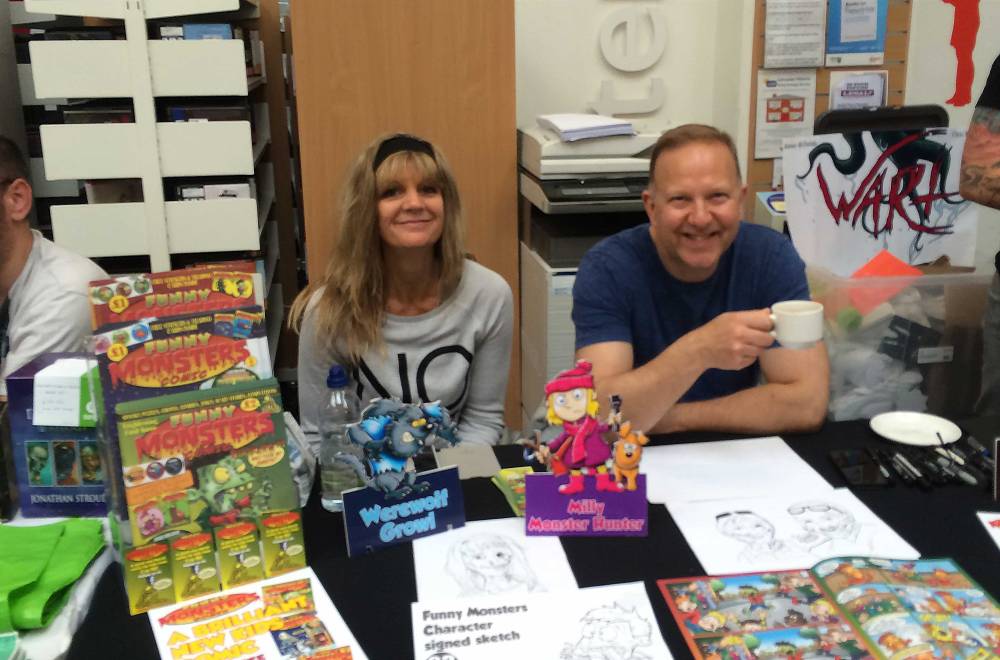 Fed up with the lack of new British humour comics being published by the major publishers, Rochdale-based comics creator Joe Matthews decided to publish his own. His wonderful Funny Monsters Comic comic features strips such as the “Zackster – Kid Zombie” (this time at the beach and causing mayhem!), “The Bed Bugs” (investugating a mysterious hair) and “Werewolf Growl” as well as a text stories and great activity pages. Every issue comes with free stickers and trading cards as an enticing gift.

“It seems I was always destined to be a cartoonist,” Joe told British comics web site downthetubes in 2015, who has also worked as a storyboard artist on the animated show Bob the Builder. “My childhood days where filled creating superheroes and comics, contributing to fanzines in the mid 70’s and self publishing my own fanzine at the age of 13. By 1985 I started having a few cartoons published in the Beano.”

His credits on DC Thomson’s humour weekly include “Ivy the Terrible”, “Ball Boy” and Billy Whiz”.

“Then, with the big influx of ‘lads’ comics I created ‘Thud n Bud’, the brainless bouncers which ran in Gas and then continued in UT. During this time I also contributed to the Newcastle-based Sunday Sun newspaper with a weekly feature called ‘The Sunday Gang’, which ran for just over two years.

“Despite unsuccessful trials on Count Duckula, Barbie and Rug Rats for London Editions, this did eventually lead to Tom & Jerry Comic and Baby Loony Tunes.

These days, you’ll see his illustrations on greetings cards and in ‘Little Monsters’ books. I was also privileged to work with him myself, on strips for Lucky Bag Comic.

In recent years, he’s concentrated on my own characters and publications. To this end, he set up his current business, Impact Printworks to concentrate on several projects in the Rochdale area, despite having clients in United States and Australia. These include the monthly All Star Squad comic for Rochdale’s Wheatsheaf Shopping Centre Kids Club since 2011, and Princess Pop Dancers comics for the Shaw-based dance school, Anna’s Dance.

• Funny Monsters Comic will be available to buy at Lancaster Comics Day.